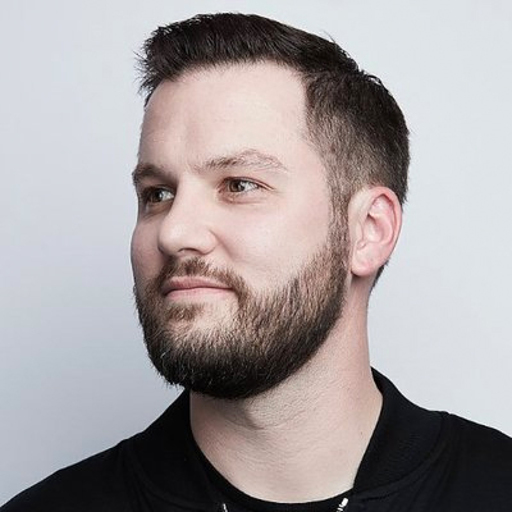 Text is boring,” he said. A friend and I were fantasizing leaving our jobs to start a company together. I had just told him how I’d love to rethink text documents. His response: “Eh… I’d rather work on something fun.”

A few years later, here we are. My friend has gone on to build a wildly popular gaming platform, which he sold during the pandemic to Hasbro. And I’m working on boring… old… text.

A lack of enthusiasm is understandable. Text is boring. It’s so commonplace, we take for granted the critical role it’s played in the transmission of ideas – from person to person, and generation to generation.

Without text our history would be murky, knowledge would be reserved only for the elite, and there would be no Twitter. Can you even imagine a world where Elon Musk couldn’t manipulate crypto prices with a tweet? No thank you.

Text is paramount, yet our everyday interaction with it is basically the same as it was decades ago. Microsoft Word 1.0 looks a hell of a lot like the latest iteration despite its 38 year lifespan. Text documents were designed for the consumption of text – top to bottom, left to right (or in some cases, right to left). They work. So, why change anything?

I’ve spent my career building design tools and they’ve evolved a lot over the past decade. One of the most radical shifts came as the web / product design industry shifted away from the raster-based world of Photoshop over to the vector-based world of Sketch. Not only was the tool more streamlined for a specific type of work, but it introduced a fundamental shift in the document format itself.

Photoshop documents were a single, fixed artboard whereas Sketch had an infinite canvas with multiple artboards. It let you zoom and pan infinitely and you could even work in the space between artboards. This new paradigm unlocked a critical aspect of the creative process that was difficult to achieve in Photoshop. 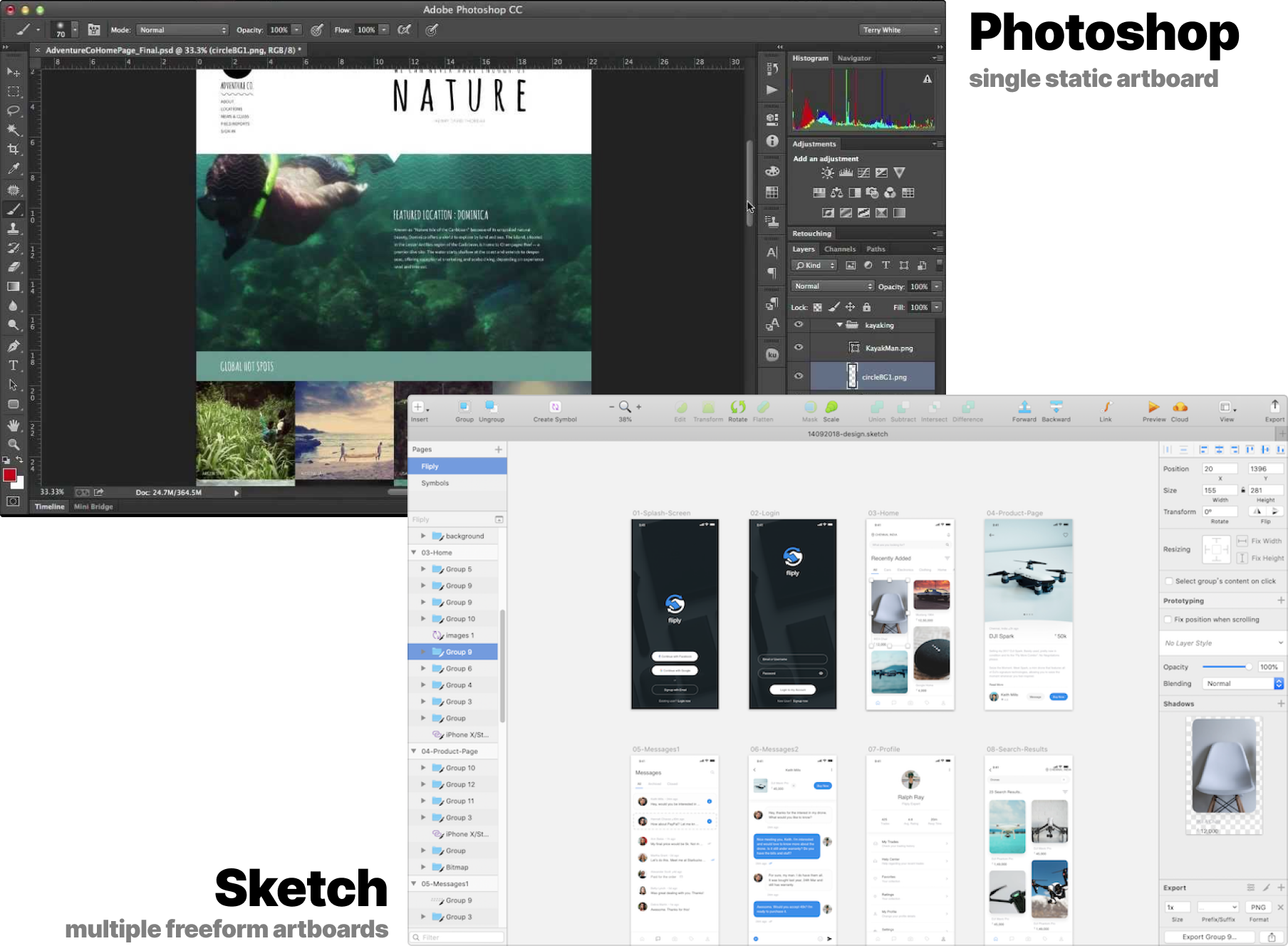 Creativity is often described as an interplay of divergent and convergent thinking – requiring both order and chaos. This is codified in creative methodologies like the Double Diamond model popularized by the British Design Council. Photoshop’s single artboard view forced you to converge on a single view of your document. Sketch’s infinite canvas, on the other hand, unlocked the ability to do divergent thinking in the same document.

Having a tool that enabled you to flow between divergent and convergent thinking fluidly was a 10x improvement that moved an entire industry. Working on an infinite canvas gave designers the ability to embrace chaos and utilize space as a feature of the Process and not just the Product. 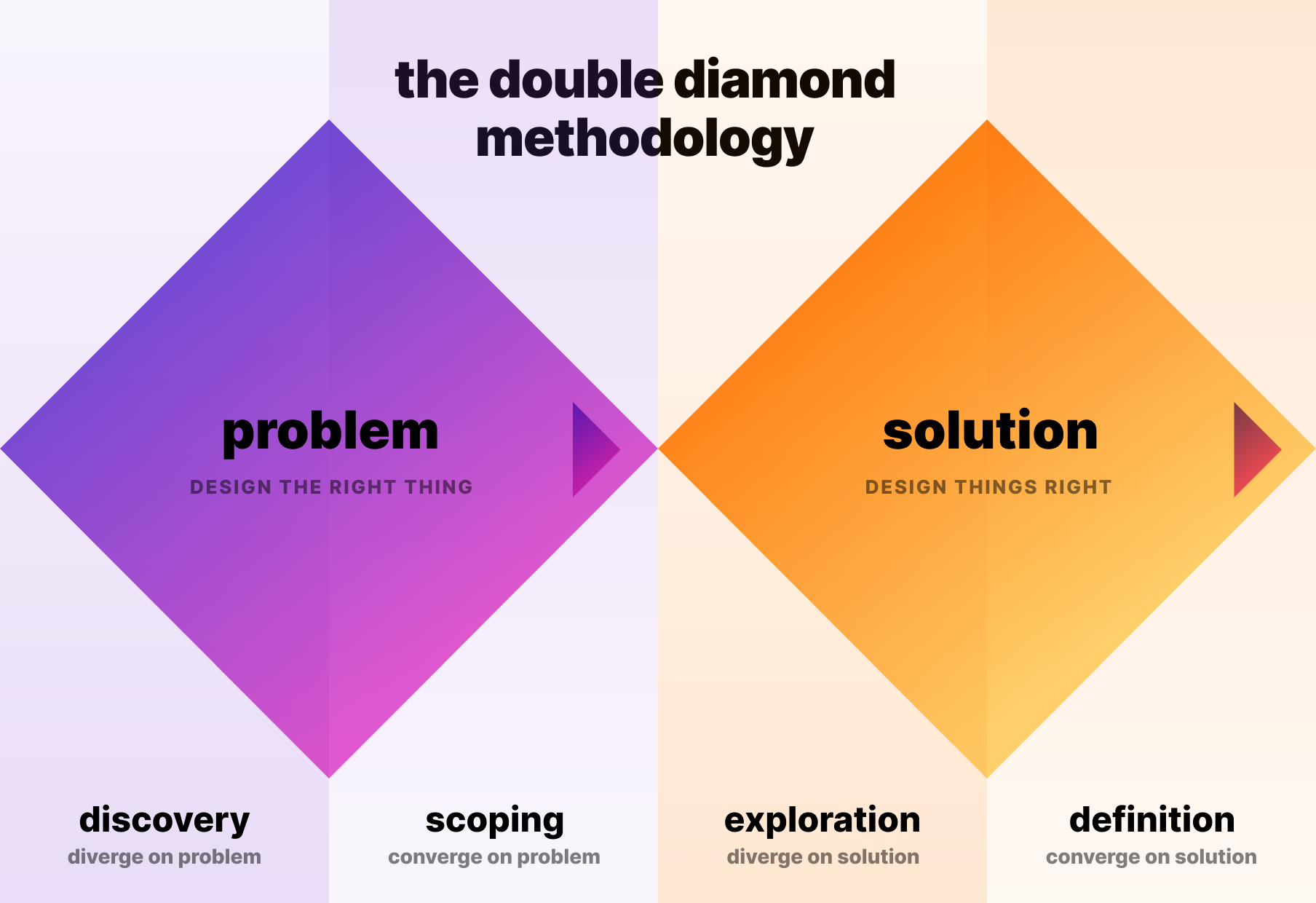 Photoshop forced you to focus on the final artifact at all times, but Sketch encouraged you to iterate. You could quickly duplicate an artboard, make some changes, and compare the two side-by-side. A waterfall of divergent approaches could be created rapidly before converging on the best approach.

Thinking outside the docs

Breaking the bounds of a document created new possibilities for the creative process. These workflows were new, but the benefits of space utilization are not.

German psychologists in the early 1900s developed a movement that studied how we perceive objects in space. Many of us have heard the phrase “the sum is greater than the whole of its parts.” This and many other principles coined by the Gestalt psychologists help explain how we naturally utilize space to identify patterns, understand relationships between objects, and aid in problem solving.

As an example, the Law of Proximity states that objects or shapes that are close to one another appear to form groups. That is, the space between objects can be used to help build relationships between them. 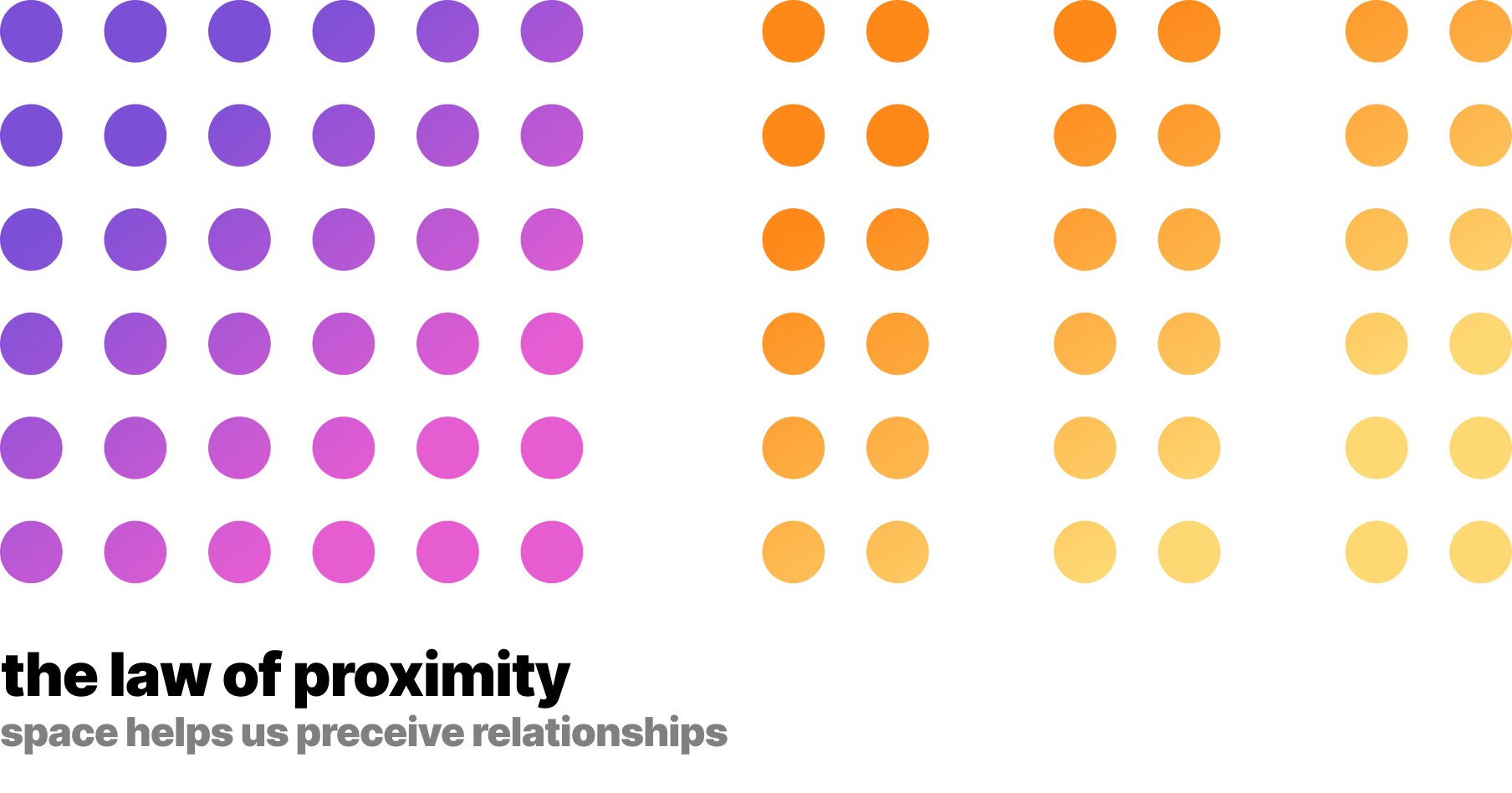 Memory is strongly tied to space as well. Our brains are hard-wired to utilize space to form memories. Our working memory does so by storing spatial information in what’s called the visuospatial scratchpad. This temporarily stores information like shapes, colors, and objects’ positions and helps us recall them.

Spatial information is also strongly woven into our long-term memory. This is exploited by memory experts, who have famously use the Method of Loci (aka, the Memory Palace Technique) to perform incredible feats of recall – like being able to recite over 65k digits of π (pi).

If you’re interested, this method is relatively easy to learn. It involves mapping elements of a sequence to points in a space that you’ve spent a good amount of time in. I first experimented with it back in college, and I was able to memorize a randomly shuffled deck of cards by mapping them to a 52-point journey around my apartment. I’m no expert, but I was able to recall the order of the deck perfectly months later.

What’s interesting is that the power of space also translates to digital spaces. You may not be able to recite exactly where each of your favorite apps is on your home screen, but I would wager a bet that if someone moved even one of those icons on you, you would be thrown off as to why things have changed. Our subconscious is constantly building a map of our environments both real and digital to help us navigate our everyday lives.

The point is: Space is a construct hard-wired into our brains making it one of the most powerful tools for thought.

So, what does all of this have to do with text? Well, we believe space is the next frontier for text. Text documents currently suffer from the same constraint of Product over Process that Photoshop did – forcing you to think in a straight line.

We’ve spent years building a new type of text editor from the ground up. It’s built on the same foundation as other text editors, but it allows you to write on an infinite canvas. It’s like a big piece of blank paper. We think it’s great for people who want to write and think. 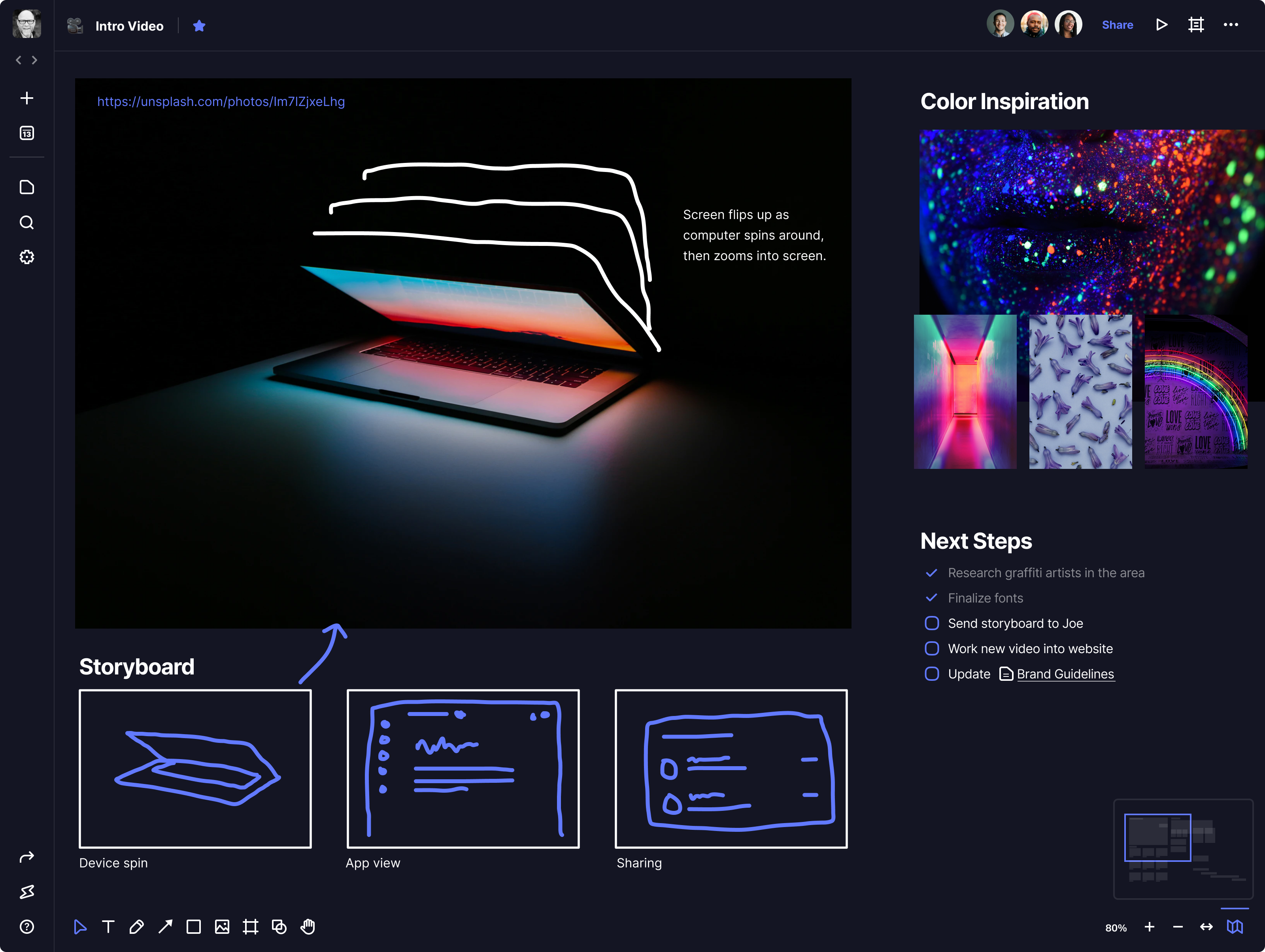 Surfaces have a freeform workflow similar to tools like Miro and Mural, but are fundamentally different under the hood. Clover is a text-first tool, which is an important distinction. In contrast to whiteboarding tools, Clover offers robust markdown support, rich-text formatting, interactive media embeds, code blocks with syntax highlighting, networked pages with backlinks, a slash / inserter, drag and drop lines, inline tasks, and everything else you’d expect from a text doc.

We set out to build a tool that combines the best of creative workflows with tried and true productivity staples. Surface docs are a big part of that, but there’s much more to be found inside Clover. It’s a full-blown workspace with nested pages, full-text search, inline tasks, and a habit-forming daily workflow.

Our goal is to make it easier for you to manage your ideas from beginning to end with a single tool, so you can spend more time in flow and less time switching between apps.

We hope you’ll give Clover a spin. Get started for free!

“Clover may be the single best web/iOS (esp iPad) application to ever exist. It’s the only one that combines all the things I need and love in one slick, intuitive package.”

P.S. We’re hiring! If you love tools as much as we do, we’d love to chat with you. See our job openings for details.